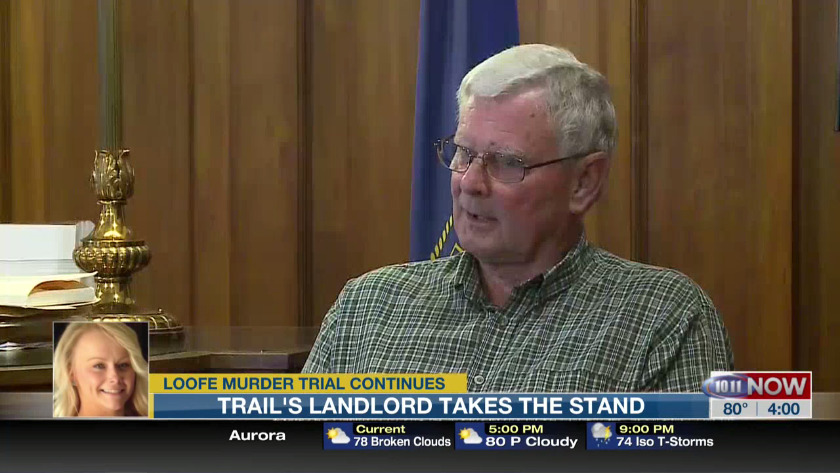 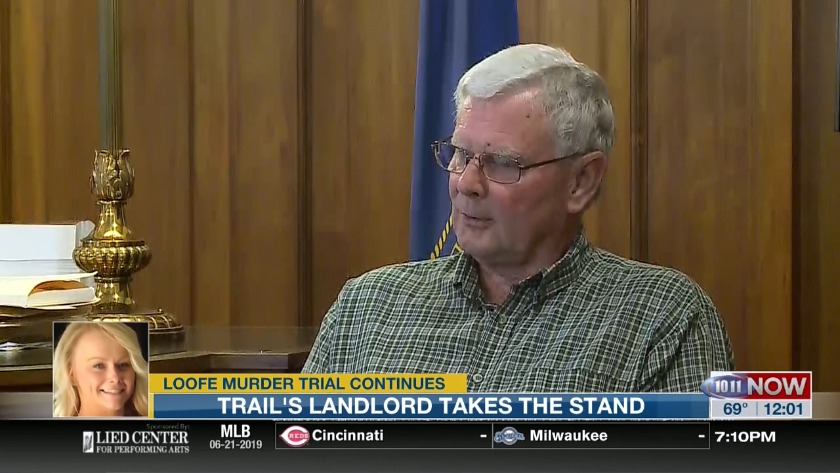 SALINE COUNTY – Flowers on the dining room table, vitamins on the bathroom counter and photos framed throughout the home- investigators painted a picture of a very normal apartment that Aubrey Trail and Bailey Boswell called home.

But investigators also found Viagra, 17 sex toys, bottles of bleach and smears on the walls- as if they had just been cleaned.

Trail and Boswell, both charged with the murder of 24-year-old Sydney Loofe, lived in a basement apartment in Wilber in November 2017.

Members of multiple law enforcement agencies searched that apartment several times in the days after Loofe went missing and electronic evidence led them to Trail and Boswell's home.

Investigators said they didn't find Loofe. So they started looking for evidence.

"You're looking for proof of that person's presence or evidence that gives investigators a timeline, so documents, receipts," Nebraska State Patrol investigator Pedro Nabegh said Friday during Aubrey Trail's trial.

Nabegh said investigators seized multiple items and looked for DNA and other evidence throughout the apartment several times. The prosecution and defense sifted through photos of their searches through most Friday afternoon.

Much of that had to go to the lab to get official results, and those haven't been covered in the trial yet.

But what investigators did find, and what Trail's landlords told them, had them looking for more answers.

"I could smell a Clorox smell when I went into the garage and it got stronger going into the house," Jennifer Koll, one of Trail's landlords said.

Alan and Jennifer Koll, along Jennifer's son Dayton He, took the stand Friday morning to testify about their experiences with Trail and Boswell.

All three described the first unusual thing they experienced was a strong bleach smell in their home on Thursday, November 16. That's one day after Sydney was last seen and after she allegedly went on a date with Bailey Boswell.

Jennifer said the smell was the strongest going down the stairs to the basement and lasted until the next day.

Other than the smell the only other thing Alan remembered from that week was the apartment's air conditioner breaking.

He said the coils were frozen, which happens when the thermostat is set too low. Alan said he noticed the thermostat was set at 60 degrees when he was able to get inside the apartment.

Dayton, who shares two walls with Trail and Boswell said he didn't hear anything unusual the night of the 15th. Neither did Alan or Jennifer.

They said Trail and Boswell were good tenants until the police came knocking on the Koll's door looking for Loofe.

The pair, who told the Kolls they were engaged and antique dealers lived there for about five months.

Alan said Trail paid the rent and he always paid in cash, sometimes a few months at a time.

The family said they were fairly quiet tenants, and didn't have many guests. Though they remember seeing one or two women with Boswell every once in a while.

Jennifer said she believes she saw Loofe with Boswell twice at the apartment.

Once on November 15, she said she saw a skinny blonde in baggy clothing with Boswell around noon that day. After seeing the news of Loofe's disappearance, Jennifer said she thought the woman she saw was Loofe.

The prosecution told Jennifer they had the same video that shows Loofe at work at the same time Jennifer believes she saw her in Wilber.

Jennifer agreed it was possible she was wrong and did not see Loofe at the apartment on the 15th.

Though Jennifer also thinks she saw Loofe at the apartment in the summer of 2017. She said she was mowing in the backyard when she saw Boswell drive up and get out of her car with a blonde woman. She told police several times during the investigation that she believes this woman was Loofe.

The defense said Jennifer has consistently told law enforcement that she saw Loofe that summer.

The prosecution asked if she could be wrong and Jennifer said yes.

The defense followed by asking if she was sure she saw Loofe and she said yes.

The Sydney Loofe murder trial continued on Friday as more witnesses were called to the stand.

Aubrey Trail, 53, is standing trial on charges of first-degree murder in the death of 24-year-old Sydney Loofe.

Friday morning,the state called the family that shared a home with Trail, and his co-defendant Bailey Boswell, to the stand.

The landlord, Alan Koll, talked about how the duo described themselves as antique dealers and said Trail always paid his rent in cash. They lived in the basement apartment of the Koll home in Wilber for 4-5 months.

The landlord said he rarely saw Trail or Boswell, and that sometimes Trail would pay rent multiple months in advance. He said they were good tenants, until police came knocking on their door. Koll said he never saw the pair after that.

He did mention a strong smell of bleach coming from Trail and Boswell's unit on November 16, the day after Loofe was last seen alive.

His wife, Jennifer Koll, said she was the one who initially noticed the bleach smell Thursday around noon. She told the jury it consumed the house as soon as she walked inside and stuck around for a few days. Jennifer said she's allergic to bleach and the smell made her sick.

Her son, Dayton He, also testified. He was living in a bedroom that shared two walls with Trail and Boswell's apartment at the time of the alleged murder.

He said he started smelling bleach the night of Nov. 15 and it got stronger on the 16th.

While He said he never met Trail and Boswell and Jennifer only met the pair once, all three residents of the home said they never showed any signs of violence or criminal activity.

They also said, other than the bleach smell, they didn't notice or hear anything unusual the night of the 15th.

Alan did however, have to repair the apartment's air conditioner that week. He said around the same time he smelled bleach, he noticed the air conditioner for the apartment was running constantly and that parts of it were frozen. He said that happens when the thermostat is set really low. Alan said when he later got into the apartment he saw the temperature was set at 60 degrees. It was the middle of November, and he said it was cold outside.

Jennifer was also questioned about various statements she's made about the case in the past. Both the prosecution and the defense said Jennifer said she thought she saw Loofe with Boswell once in the summer and once on November 15th.

The state then told Jennifer that Loofe was at work when she thought she saw her on the 15th, according to their records. Jennifer said she could be mistaken.

The defense asked many questions about the alleged sighting of Loofe and Boswell together the summer of 2017. They said Jennifer told them she was mowing in the backyard of the home when she saw Boswell and a blonde woman get out of Boswell's car and go inside the apartment carrying groceries. She would later tell police she thought the blonde woman was Loofe.

The defense said Jennifer's story stayed consistent over several interviews and she always said she thought she saw Loofe. The prosecution asked her if she could be wrong and she said yes, she was a distance away.

Witness testimony is expected to continue throughout the day on Friday.