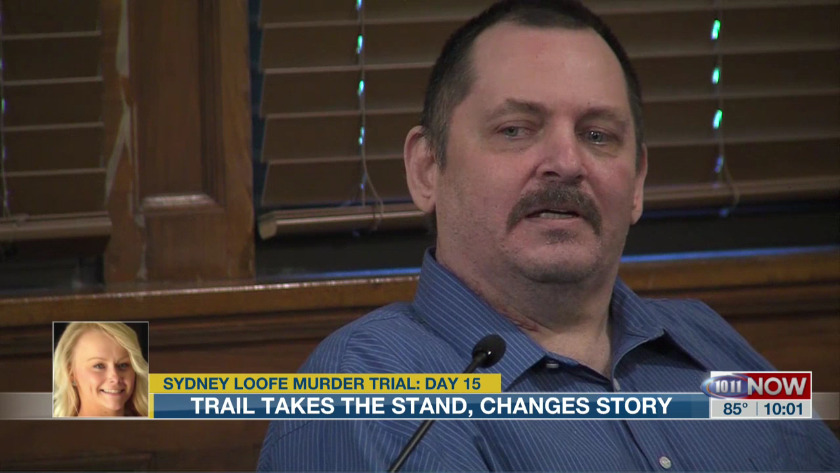 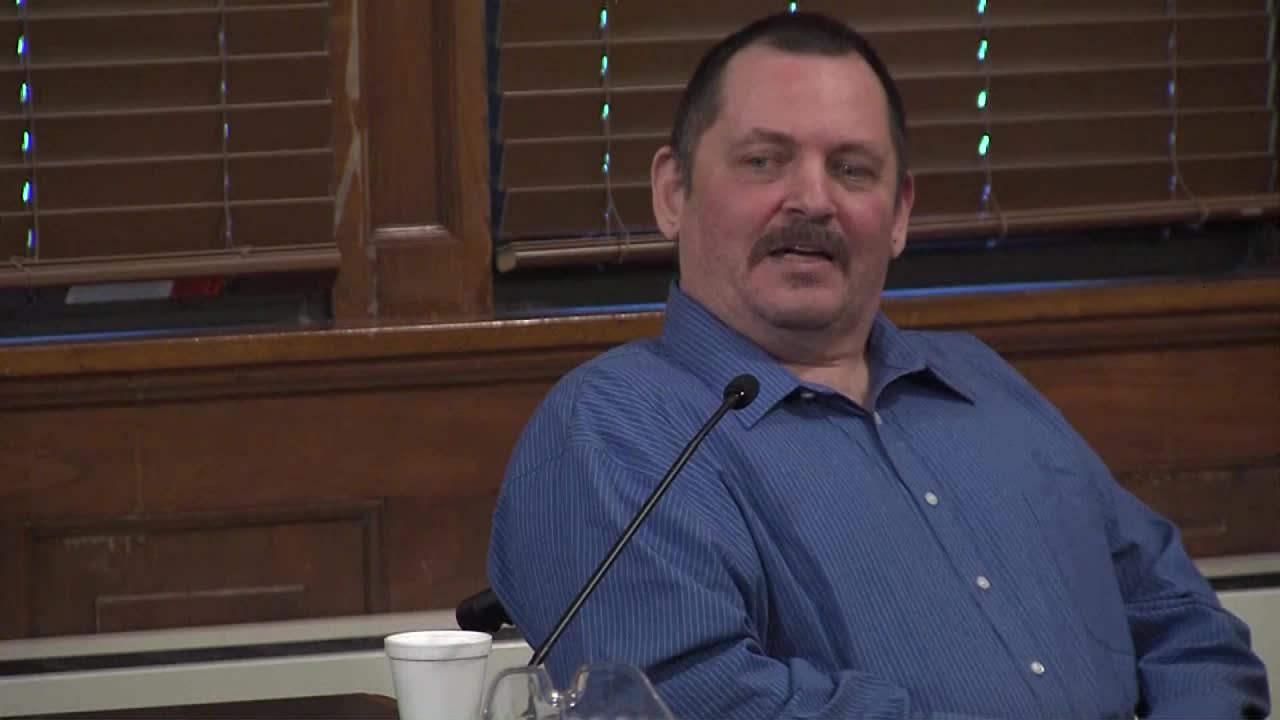 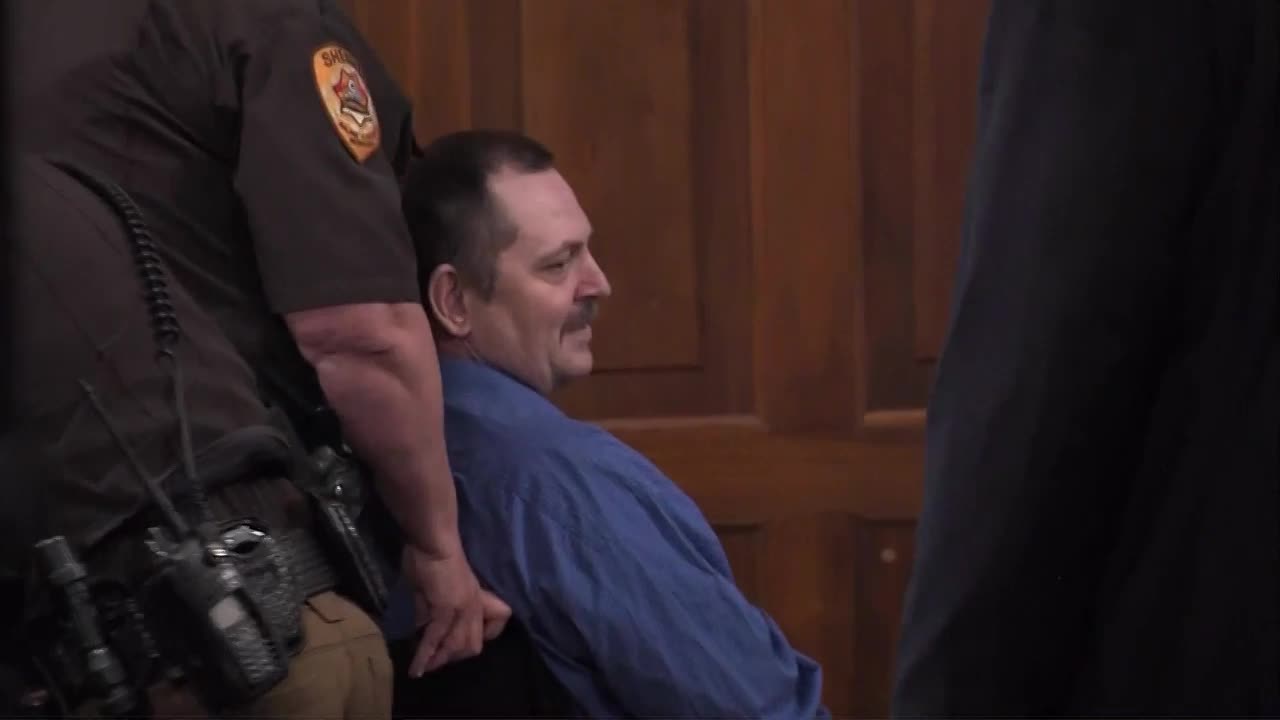 Above is a coded letter reportedly sent between Bailey Boswell and Aubrey Trail while in Saline County Jail. The prosecution claims the two sent multiple letters in an attempt to communicate and talk about their defense. (Photo: 1011 NOW)

He said he was in a checkout line at Menards, where Loofe worked and he saw her crying. Trail said he asked her what was wrong and he handed her a $100 bill.

Trail claimed from there, he paid Loofe to make phone calls for his antique business, and her and his co-defendant, Bailey Boswell, were in a romantic relationship.

At one point, Trail said, Loofe wanted to stop working with them because she didn’t want to be involved in illegal activity.

According to Trail, a while later, Boswell and Loofe reconnected on Tinder, but since Boswell’s photos looked nothing like her, Loofe didn’t know she was going on a date with Boswell until she picked her up.

Trail said the two started talking about Loofe getting involved in Trail’s business again, and the talk continued the next day at Boswell and Trail’s apartment in Wilber.

“Caught up at first said she wasn’t doing very well financially, got a tin with money in it told Syd if you want to get back and work with us I can take care of problems,” Trail said on the stand. ‘She was very timid. She was in desperate straits ……I played on that”

Trail also said he, Boswell, and Loofe agreed to engage in sexual activity, and that they agreed to experiment with choking.

Trail told the courtroom he made up parts of his story he told FBI agents about the night Loofe died.

He said it took place during a sexual encounter with Loofe and Boswell.

He said he had an extension cord around Loofe’s neck, and she started shaking before she stopped breathing.

According to Trail he tried to give Loofe mouth-to-mouth but was unsuccessful.

More testimony is expected from Trail on Tuesday afternoon.

Earlier on Tuesday, after more than three weeks of testimony, the prosecution rested its case.

Trail appeared in court for the first time since slashing his throat as a witness took the stand over two weeks ago.

His defense, Joe and Ben Murray, had their first chance at calling witnesses.

The defense called Terra Gehrig, who told them she was one of Loofe’s best friends.

Gehrig was asked about Loofe’s mental state soon after she went missing.

Gehrig said Loofe struggled with anxiety and depression and had gone home the weekend before she went missing to talk to her parents about getting her mental health back on track.

She said this made her concerned when Loofe went missing. The defense asked if she was worried about Loofe harming herself.
“Because of events that happened that weekend I was fearful to go to her house because I was worried something like that had happened,” Gehrig said.

The defense also asked Gehrig about Loofe’s drug use and if it concerned her.

“At one point in time she was snorting coke,” Gehrig said. “Only a handful of times and when I realized she was doing it and sat her down and I told her I would tell George and Susie if she kept doing it and she stopped.”

She said at one point Loofe did cocaine during a trip to Colorado to stay awake, but it wasn’t regular for Loofe, not nearly as often as her marijuana use.

The defense also asked Gehrig about Loofe’s online dating habits. Gehrig told them Loofe was on Tinder and a few other dating websites.

In cross-examination, the prosecution asked Gehrig if she thought Loofe would commit suicide.

Gehrig said she was worried, but Loofe told her once she would never hurt herself because it would hurt her parents too much.

The prosecution also asked Gehrig what she knew about Loofe’s sexual activity and dating.

Gehrig told the prosecution Loofe had a breathing problem because of her back and she wouldn’t have wanted to be choked.

She also said Loofe would never be interested in engaging in sexual activity with a woman who had a boyfriend, or who wanted to introduce the man into their relationship.

The prosecution showed a text conversation between Gehrig and Loofe on November 15.

They were talking about Loofe’s date with Bailey Boswell.

In the conversation, Loofe told Gehrig she had a good time with Boswell and she hoped she was single.

“She said she’s down for anything so I hope she doesn’t have a boyfriend. I didn’t ask,” the text from Loofe said.

That was the last conversation Gehrig had with Loofe.

The defense rebutted the prosecution's line of questioning by bringing photos from Loofe’s iCloud back into the courtroom.

Previous testimony revealed there were several photos of “memes” about choking or rough sex in Loofe’s iCloud, as well as photos of Loofe in “various stages of undress.”

The defense showed Gehrig these photos and asked “do those depict someone you would believe to be sexually timid?”

Gehrig said no, but added “I don’t see how this picture represents her sex life.”

The prosecution then asked Gehrig if she had photos on her phone that are sent to her through Facebook, Gehrig said she probably had thousands but they didn’t indicate what her personality was.

The defense also called two hotel employees who said they saw Loofe at a hotel in Falls City in the months before her death.

His testimony centered on letters sent between Trial and his co-defendant Bailey Boswell found in the Saline County jail.

The first letter, found in the jail’s library in March 2018 starts out with Trail declaring his love for Boswell.

“I love you to infinity and back on a one wheeled bicycle,” the letter reads.

Then it launches into the story Trail tells Boswell she should tell investigators.

In the letter, the prosecution said Trail refers to the Loofe case as if it was a drug case.

The letter goes on to explain that Trail told investigators that Boswell didn’t know the two other women in the room with him when Loofe was killed.

In that letter, Trail also said the two women- whose names he said Boswell didn’t know- were freaking out because Boswell was, and they were worried she was going to tell police what happened so they forced her to help clean up and drive the body out to Clay County.

Then he tells her to do whatever it takes to maintain her innocence.

“If worst comes to worst, I need you to testify against me,” Trail wrote. “Don’t spend your life in prison because of me. Don’t take blame for something you only had forced involvement in.”

The next letter Maseth described was a code found in the jail’s rec center.

“It’s a simple code, you write with the top line of letters and you decode with the bottom line,” Maseth said.

Letters written in that code were found after that one, also in the rec center.

This letter, added on to the story Trail told Boswell to tell in the first letter found in the jail’s library.

In the letter, Trail details the circumstances around the alleged sexual fantasy Loofe was involved in.

“You asked if you could be in it and I said no,” Trail wrote. “It was after 2 a.m. when the other two girls got there, I let them in through the kitchen door. I introduced them as Jen and Kim. You can make up your own description of what they look like.”

Trail wrote that Boswell should tell investigators that Trail talked to Sydney for a few minutes and told her it would all be okay. He told her to say they went in the bedroom for about an hour and then Trail came out and told Boswell what happened and she freaked out.

Trail continued on to write “We have to make you look like a victim. Make people hate me and feel sorry for you.”

Another coded letter from Trail to Boswell was read, this one talked about a story for Boswell to tell investigators about making a snuff film.

“The three girls and the FBI are saying you wanted to make a torture murder video and that’s why you were recruiting girls on Tinder,” Trail wrote.

“Tell them I told you months before that I made a snuff film once and sold it for lots of money. Tell them that once you and I were talking about ways to make a lot of money and I said we could make a fake snuff film.”

In the letter, Trail continues on to write that Boswell should tell investigators that he told her to find the girls and Trail would pay them and they wouldn’t get seriously hurt, but there would be pain involved. Trail told her that the women she recruited had to think it was real and Boswell needed to get them texting about killing and torture.

“You agreed to do it all and that’s why you were on Tinder, that’s why all the girls were doing that,” Trail wrote. “Now you know it was all lies and I planned to kill. You’ll have to fill in the rest of the blanks baby.”

The court read one letter from Boswell to Trail, it started with an apology.

The defense asked Maseth if these letters showed Trail consistent in his goal to protect Boswell, Maseth said yes.

The defense also asked him if Boswell ever said these letters were the true, Maseth said Trail only said that was what Boswell was supposed to tell the police.