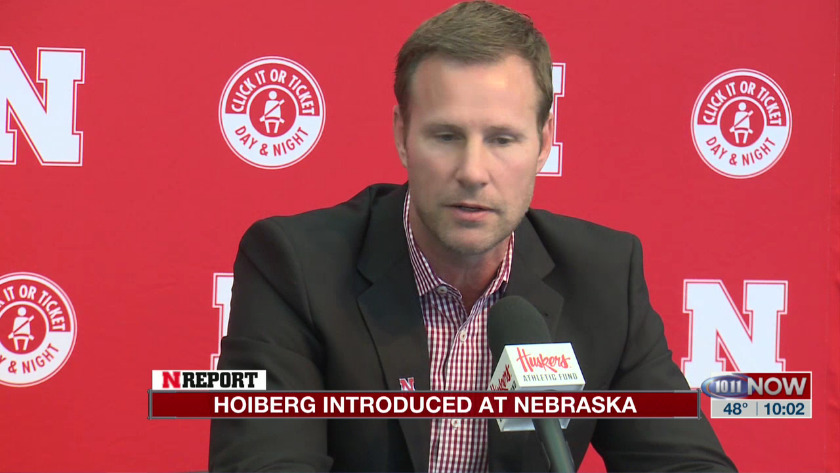 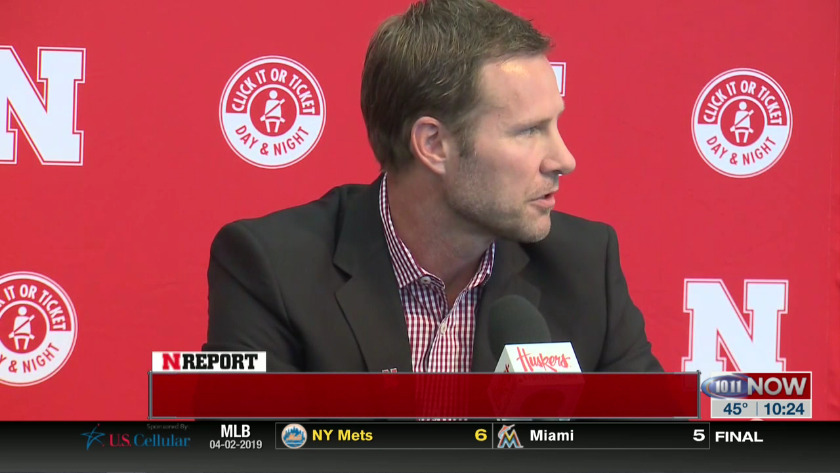 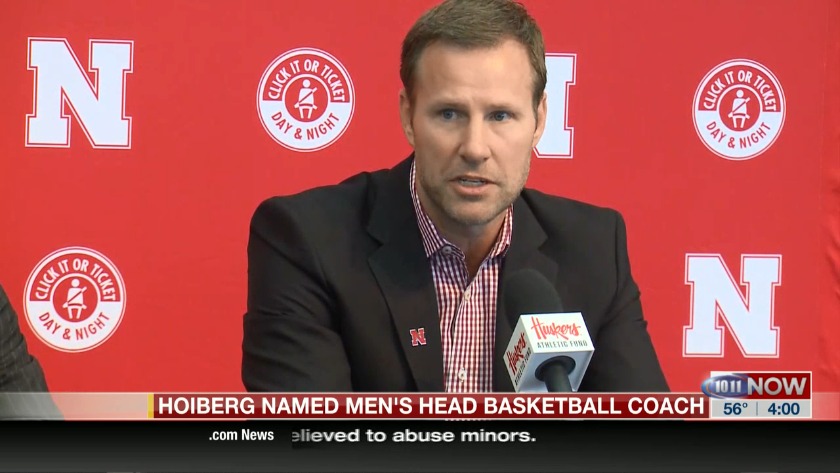 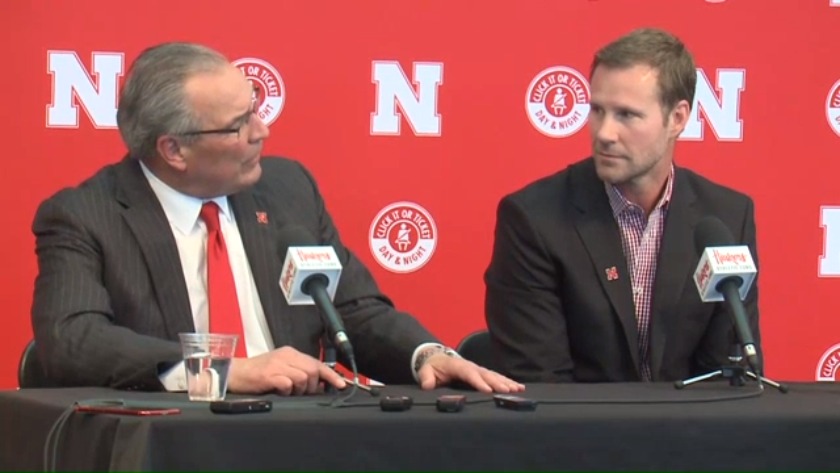 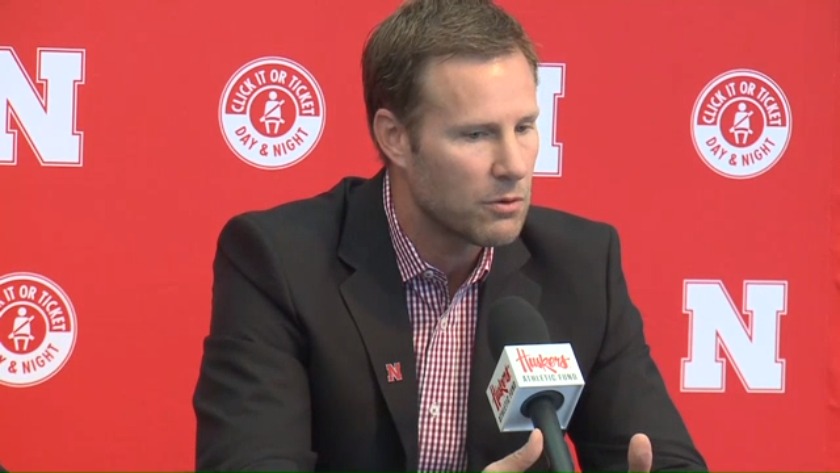 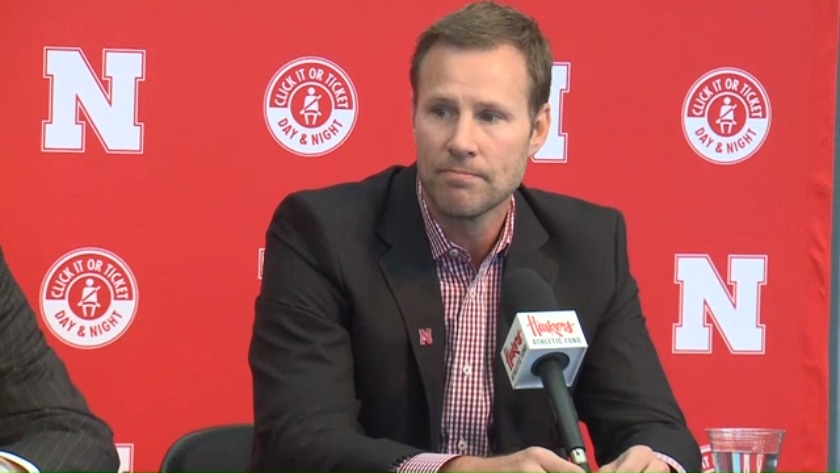 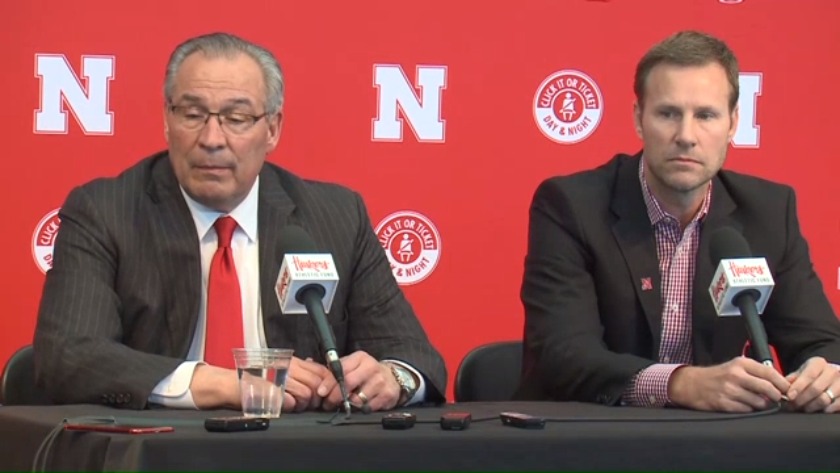 Bill Moos presents Fred Hoiberg with press release of his grandfather's hiring in 1955. 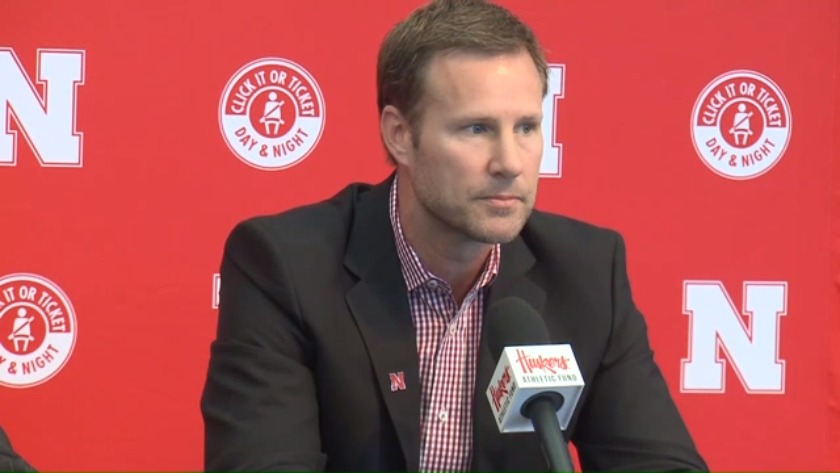 Fred Hoiberg on coming to Nebraska after coaching for Bulls, Iowa State 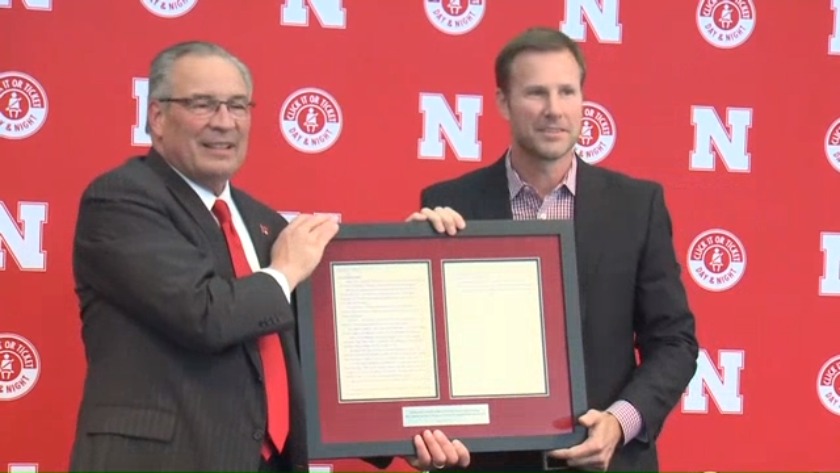 Fred Hoiberg talks about his family ties to Nebraska

Bill Moos presents Fred Hoiberg with press release of his grandfather's hiring in 1955.

Nebraska AD Bill Moos presents Fred Hoiberg with the press release from his grandfather's hiring in 1955. Jerry Bush guided the Husker Men's Basketball program for nine seasons from 1955 to 1963.

Hoiberg, who was born in Lincoln, is the 28th coach in the history of Nebraska men’s basketball. He joins a fraternity of Husker head coaches that includes his grandfather, Jerry Bush, who guided the Husker program for nine seasons from 1955 to 1963.

“First, I want to thank Bill Moos, Chancellor Green and President Bounds for the opportunity to lead the Nebraska men’s basketball program,” Hoiberg said. “I can’t express how excited I am to be back on the sidelines and to be coaching at a university that means a lot to my family and me."

“Lincoln is a special place for our family. I was born in Lincoln, my grandfather Jerry Bush was the head coach at Nebraska, my other grandfather was a long-time professor there, and my parents are proud graduates of the University of Nebraska. Nebraska has always felt like a second home."

“I had the opportunity to coach at Pinnacle Bank Arena with the Bulls, and I have seen first-hand that the facilities are as nice as any in the country. When you couple that with a loyal and passionate fan base, you can see there is great potential for the future of Nebraska basketball.”

Moos said the diverse and accomplished resume Hoiberg brings to Nebraska provides the Huskers a great opportunity to reach new heights in the Big Ten Conference.

“We are excited to welcome Fred Hoiberg, his wife Carol, and their family to Nebraska. He will be an outstanding representative of the University of Nebraska, and a great leader for our men’s basketball program,” Moos said.

“When you look at Coach Hoiberg, you see an individual who has had success as a player, a coach and served in an NBA front office,” Moos said. “Fred’s background sells itself on the recruiting trail, and will help us bring in the type of student-athletes needed to compete at the highest level. The style of play he will bring will not only appeal to prospective recruits, but will provide our great fans an entertaining brand of basketball.”

Hoiberg has five years of experience as a college head coach, guiding his alma mater, Iowa State, to four NCAA Tournaments in five seasons from 2011 to 2015, while also winning two Big 12 Tournament titles. He served as the head coach of the Chicago Bulls for parts of four seasons from 2015 to 2018. He also worked in the front office of the NBA’s Minnesota Timberwolves from 2006 to 2010.

“Bill Moos has made an exceptional choice to lead Husker basketball into the future,” University Nebraska Chancellor Ronnie Green said. “I look forward to welcoming Coach Hoiberg and his family to Nebraska and am excited to see where he takes the program.”

Before his success as a head coach, Hoiberg made his name as a player at the collegiate and NBA levels. Hoiberg was a four-year starter for the Cyclones and was a third-team All-American as a senior. He was a two-time All-Big Eight pick and a two-time Academic All-America selection. He is a member of the ISU Hall of Fame and had his jersey retired following his playing career.

A second-round draft pick in 1995, Hoiberg played 10 seasons in the NBA with the Indiana Pacers, Chicago Bulls and Minnesota Timberwolves. Hoiberg led the NBA in 3-point percentage in his final year in the league.

The University of Nebraska and Hoiberg have agreed to a 7-year, $25 million deal.

A special gift from Athletic Director Bill Moos to @CoachHoiberg. ?? 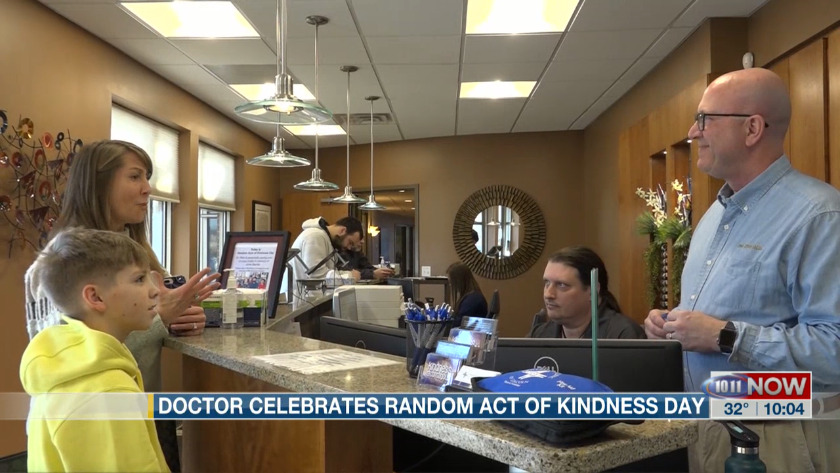